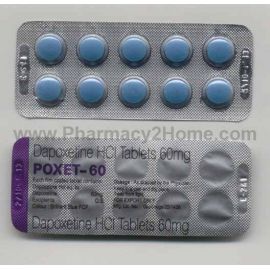 Priligy was discovered as an antidepressant medicine but was found to be very effective in treating premature ejaculation. It is rapidly absorbed and eliminated from the body and that makes it ineffective as an antidepressant. But its action improves the time of ejaculation after vaginal penetration, therefore, it became popular as a treatment for PE.

Priligy or Dapoxetine is an SSRI – selective serotonin reuptake inhibitor. Serotonin is a neurochemical which controls the ejaculatory function. Priligy inhibits the compound that transports the serotonin thereby increasing its levels in the brain. This increases the action of serotonin on the postsynaptic cleft in the brain and delays the ejaculation.

How to take the medication?

Take it orally at least 1 - 3 hours prior to a sexual activity.

The dose is one pill per day. It is taken on as per the need basis.

The chance of a missed dose is unlikely since it is taken as per the need. Do not take more than one pill in a day.

Do not use along with recreational drugs, MAOIs, CYP3A4 inhibitors or with other SNRIs. Do not use if you are under 18 years of age or very elderly. Not recommended for males who are not diagnosed with PE.

When should Priligy not be used?

Heart disorders, conduction disorders, history of orthostatic hypotension or syncope, manic or severe depression, along with MAOIs, CYP3A4 inhibitors or with other SSRIs or SNRIs.

How long should you take Priligy?