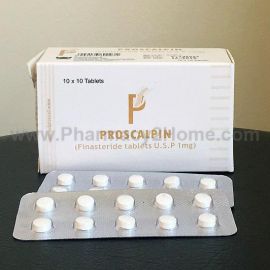 Propecia is a medication used to treat male pattern hair loss and baldness in men only. Male pattern hair loss is a condition which results in receding hairlines and hair thinning on the scalp. Propecia has been shown to be safe and effective in men with moderate hair loss of the vortex and anterior mid-scalp area. Propecia is also known by its chemical or generic name, finasteride. It is grouped into a class of medications called 5-alpha reductase inhibitors.

How does Propecia work?

Propecia works by reducing the amount of DHT in the body. DHT, or dihydrotestosterone, is a potent male hormone responsible for hair loss on the scalp. DHT is produced in the adrenal glands, testes, prostate, and hair follicles. Hair loss occurs when DHT binds to hair follicles, causing them to shrink in size and eventually die out. Hair follicles on the back and side of the head are typically resistant to DHT resulting in the pattern typically seen with male hair loss.

DHT is converted from testosterone by an enzyme called 5-alpha reductase. By blocking this enzyme, DHT levels are greatly reduced. Because hair follicles cannot be recovered, Propecia works to slow male pattern hair loss rather than cure it.

How do I take Propecia?

Propecia comes in a 1 mg film-coated tablet formulation. It is taken once daily by mouth. After oral dosing, concentration of DHT in the body is significantly decreased by approximately 65% within 24 hours.

Propecia may be taken with or without regard to meals. Effects of treatment can be seen as early as 3 months after initial daily use. Benefits are sustained with continued use of the medication. Therefore, if treatment is stopped, reversal of effects can occur within 12 months.

As with all prescription medications, Propecia may produce side effects. These side effects may include lower libido or desire for sex, erectile dysfunction, and decreased sperm count. Note that these side effects are uncommon and occur in less than 2% of men. Most side effects disappear with continued use.

Other side effects may include dizziness, weakness, depression, allergic reactions such as rash and hives, problems with ejaculating, testicular soreness, breast swelling, and rarely, breast cancer.

According to manufacturer labeling, there are no clinically important drug interactions to be noted. However, because Propecia is metabolized extensively in the liver, caution is advised when taking other drugs that affect liver metabolism. Clinical studies have shown no clinically significant interactions with medications such as acetaminophen, alpha blockers, diuretics, ACE inhibitors, beta blockers, benzodiazepines, nitrates, calcium channel blockers, HMG-CoA reductase inhibitors, quinolone antibiotics, digoxin, propranolol, theophylline, and warfarin.

Can I use Propecia if I am pregnant or breastfeeding?

Propecia is not labeled or indicated for treatment in women. It is a teratogenic drug classified as pregnancy category X. Therefore, it should not be taken or handled by anyone that is pregnant or breastfeeding. Contact with the drug may result in adverse effects and fetal abnormalities in these specified patient populations.

Propecia is not indicated for women or children under 18 years old. Caution should be used in patients with liver impairment. No dosage adjustments are necessary for those with renal impairment.

Propecia should be kept in its original container and sealed when not in use. This medication is optimally stored in a cool, dry area at room temperature.

Keep medication out of the reach of children.

Propecia may affect screening tests for prostate cancer. Namely, PSA, or Prostate-Specific Antigen, blood tests are affected. This is due to Propecia causing indirect decreases in PSA levels. It is advised to consult with a physician if you are taking Propecia and undergoing a PSA test.

Propecia is a common medication that is FDA approved to treat male pattern baldness and hair loss. While it has been deemed safe and effective for use, it may also cause side effects as mentioned above. It is important to be aware of side effects and interactions when taking this medication. Therefore, it should be taken under the supervision and guidance of a healthcare provider.