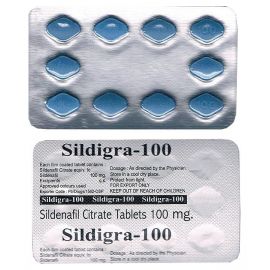 Sildigra is an erection-enhancing drug commonly prescribed for the men suffering from erectile dysfunctions. This medicine contains Sildenafil Citrate, which can help men to achieve and sustain an erection by improving the flow of blood into the penis. It belongs to the group of drugs called PDE-5 (phosphodiesterase type 5) inhibitors.

When is Sildigra prescribed?

Sildigra is prescribed for treating erectile difficulties cause due to the impaired blood flow into the penis. It is a phosphodiesterase type 5 inhibitor, which works by relaxing the muscles situated in the walls of the arteries of the penis. This leads to a greater amount of blood entering into the penis resulting in an erection and an improved sexual performance.

How to use Sildigra?

Men should take Sildigra tablets about 20 to 30 minutes before a planned sexual activity. The doses can be taken only once a day. Hence, men should avoid taking the dose of this drug more than once in a 24-hour period.

Patients are advised to avoid eating fatty and oily foods while using Sildigra as these foods may affect the action of this medication and make it less effective.

Also, the tablets should not be mixed in alcohol or any intoxicating substance as it may result in a delay in initiating the effect of the medicine and even lead to serious consequences. Patients can consult a physician to learn the exacts dosage recommendations of this drug.

What are the side effects of Sildigra?

Sildigra may cause a few mild side effects such as facial flushing, blocked nose, headache, nausea, impaired vision and an increased sensitivity to bright sunlight. Most of these symptoms tend to subside within 4 to 5 hours.

The severe side effects of Sildigra include dizziness, problems with hearing and temporary loss of vision. In case, patients develop such side effects, they should contact a physician immediately.

In rare cases, patients may develop priapism (a painful or prolonged erection that lasts longer than 4 hours). It has to be treated immediately as it may cause permanent damage to the penis.

What are the substitutes of Sildigra?

What are the drug interactions of Sildigra?

Sildigra may affect the action of other drugs such as antihypertensive drugs including alpha-blockers. The use of nitrates should also be avoided while using Sildigra as the combined hypotensive effect of both the drugs can lead to unconsciousness and even syncope.

Sildigra tablets should be stored at a cool and dry place. It should be kept out of reach of children. The medication must be discarded in an appropriate manner once its expiry date is over.