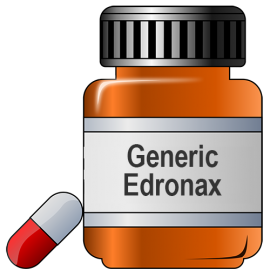 Reboxetine, which is also called as Edronax or Prolift is a selective norepinephrine reuptake inhibitor (NRI) and it inhibit G-protein coupled potassium channel in the heart and the brain. It has a half life of around 12 hours and 98% of protein binding capacity. This drug is metabolized in the liver and is then excreted with the urine.

Reboxetine is classified as an antidepressant and is administered as oral pills and is allowed to take only with the prescription. This drug is used to treat Major depressive disorder, Panic disorder, ADHD and bulimia nervosa. The start-up dose for an adult is 4 mg two times a day and this may be increased up to 10 mg per day after 3 weeks of time. This drug has to be taken at least 2 weeks continuously to see the effect. Normally this treatment will continue up to six months after the symptoms have disappeared.

The overdose of this antidepressant may show symptoms such as sweating, tachycardia and changes in blood pressure. But, this drug is having a lower risk than the other antidepressants.

Store this drug in a cool dry place at room temperature. Check for the expiry date and keep out of reach of children.

There are several contraindications for this drug and they are; narrow angle glaucoma, epilepsy, heart diseases, bipolar disorder, urinary retention and hypersensitivity (allergy) to this drug. Reboxetine should be used during pregnancy only if the potential benefit justifies the potential risk to the fetus. Reboxetine administration is not recommended in women who are breast feeding.

Reboxetine may interact with some other drugs such as papaverine, ketoconazole, cyclosporin, tacrolimus, paroxetine, sertraline, quinidine, fluoxetine and fluvoxamine. Therefore, do not forget to mention all the drugs you might be taking during the consultation with your doctor.

This drug should be taken by the patients with past seizures under proper supervision as this drug has an ability to precipitate epileptic attacks. Also, it may arouse suicidal thoughts in some patients.

If you forget to take a dose, take it as soon as you remember. If when you remember, it is nearly time for your next dose, then leave out the missed dose and take your next dose when it is due. Do not take two doses together to make up for a forgotten dose.