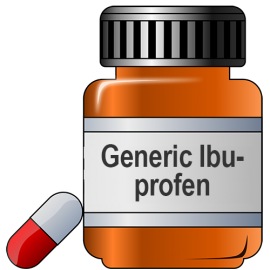 Ibuprofen is a non-steroidal anti-inflammatory drug (NSAID) with ibuprofen as its active ingredient. It is one of the most widely used drugs in the world when it comes to management of pain, fever and swelling, especially when associated with common cold or flu, menstrual cramps, toothache, muscle aches and arthritis. Ibuprofen is marketed under dozens of brand names and generic versions, Ibuprofen being one of them. Ibuprofen has been deemed ����core medicine_��������� by the WTO, meaning it is a necessary part of any basic healthcare system.

Ibuprofen should be stored at 15-30 C (59-86 F), away from a direct source of moisture and light, out of the reach of children and pets.

Ibuprofen is an oral medication taken by mouth with some water. It can be taken with meals in case it causes stomach upset, however, it works faster when taken on an empty stomach.

For mild to moderate pain, fever, menstrual cramps and aches, the usual dosage is 200 mg to 400 mg every four to six hours. Treatment of arthritis requires a larger dose, usually from 300 mg to 800 mg three to four times a day. The maximum allowed daily dosage for unsupervised patients is 1200 mg per day. In some cases a dosage of up to 3200 mg per day can be tolerated, as long as it is under medical supervision.

If you miss a dose, take the drug when you can, but not if the time for the next dose is near. Do not double the dose.

Before starting treatment with Ibuprofen, notify your doctor if you have a medical history of asthma, gastrointestinal ulcers, blood disorders, heart problems, nasal polyps, hypertension, kidney or liver disease and stroke. Avoid alcoholic beverages while taking this drug. Ibuprofen is not recommended to pregnant women, especially during the first and the last trimester. Drugs that may interact with Ibuprofen include anti-platelet drugs, blood thinners, bisphosphonates, corticosteroids, SSRI antidepressants and other NSADs.

Possible side effects of Ibuprofen may include upset stomach, nausea, vomiting, headache, constipation, diarrhea and drowsiness. Notify your doctor if you start experiencing more serious side effects such as unusual bruising or bleeding, blood in stool, urine or vomit, vision and hearing problems, swelling of the joints, severe fatigue, stiff neck and allergic reactions (rash, hives, swelling, difficulty breathing, and irregular heartbeat).

Ibuprofen is a very good solution in treatment of mild to moderate pain due to dental problems, headache and migraines, menstrual periods, arthritis, sore muscles and other common painful conditions. It is also effective in treatment of fever in conditions such as common cold, flu and some other bacterial and viral infections. With ibuprofen as its active ingredient, it is one of the world's most widely prescribed and used NSAIDs.

Ibuprofen should not be used in case of previous allergic reactions to ibuprofen or any of the drug's inactive ingredients. Its use in pregnancy is not recommended.

Avoid prolonged use of this drug, especially if using it without a doctor's prescription or explicit recommendation. Stop using it if the fever persists or worsens after three days of use or if the pain does not subside or becomes more severe after ten days of use.