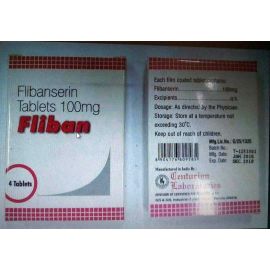 Flibanserin is a medication indicated for the treatment of hypoactive (low) sexual desire disorder (HSDD) in women. More specifically, it can be used for women who have not undergone menopause, not had problems with decreased sexual desire in the past, or have not had any sexual desire regardless of the type of sexual activity, surrounding circumstances, or sexual partner. Flibanserin is the generic or chemical name for Addyi. It is grouped into a classification of medication called multifunctional serotonin agonist antagonist (MSAA).

How does Flibanserin work?

Flibanserin was originally developed as an antidepressant medication. Its mechanism of action can be attributed to its activity on certain serotonin receptors in the brain. The overall effect of this process is lowered serotonin with an increase of norepinephrine and dopamine. These neurotransmitters have been found to play a role in the regulation of sexual response. The inhibitory nature of serotonin and the excitatory nature of norepinephrine and dopamine is modulated and regulated with the use of Flibanserin. Overall, it may improve the stability of these brain neurotransmitters to elicit a normal sexual response.

How do I take Flibanserin?

Flibanserin is formulated as an oral tablet with a strength of 100 mg. The recommended dose is one tablet daily at bedtime. Administration of Flibanserin during the day may increase the risk of low blood pressure, fainting, and sedation which could lead to an accidental injury.

Flibanserin should not be taken alcohol due to the increased risk of low blood pressure, syncope, and drowsiness. It may also interact with certain medications such as oral contraceptives. Other interacting medications include antihistamines, opioids, hypnotics, and benzodiazepines due to their similar side effect profile. Caution should be taken with CYP3A4 inhibitors and inducers such as ketoconazole, itraconazole, clarithromycin, cimetidine, carbamazepine, phenobarbital, phenytoin, and rifampin, among others. Caution should also be advised with CYP2C19 inhibitors as well as digoxin.

Can I use Flibanserin if I am pregnant or breastfeeding?

Flibanserin is in pregnancy category C. In other words, no adequate studies have been performed to show risk in this population. However, a physician or healthcare provider should be advised if you are pregnant or breastfeeding and are thinking about taking Flibanserin.

Individuals should not drive or engage in activities that require mental alertness until at least 6 hours after administration or until full effects have been evaluated.

Flibanserin should not be taken with grapefruit juice as this can increase the concentration of the drug in the body. This may lead to an increased risk of low blood pressure and fainting. Take Flibanserin with other herbal or dietary supplements such as St. John’s Wort may also increase the risk of side effects.

This medication should be stored in a cool dry area.

Keep away from the reach of children.

Flibanserin may be an effective treatment option for women with HSDD, or low sexual desire, given that they fall within the appropriate group aforementioned above. The main side effects of this medication involve drowsiness and sedation which can be increased if taken with other interacting medications. Use of this medication should be under the close supervision of a physician and taken as directed.