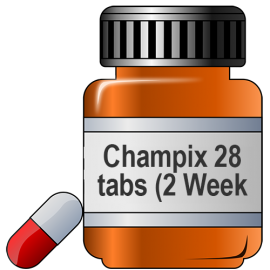 The active ingredient of Champix is varenicline, a nicotinic receptor partial agonist. It stimulates nicotine receptors like nicotine itself, but in a lesser degree, meaning the effects of the drug are weaker than the effects of actual smoking. It works by reducing the cravings for cigarettes and other tobacco products, which are perceived as the main reason for a nicotine addiction, and it also reduces the pleasurable effects of smoking. This way Champix can help some people quit smoking.

Champix should be stored at room temperature (150 to 30 C or 59 to 86 F), away from sources of moisture, heat and light, and used before its expiration date.

Champix is an oral medication, taken by mouth with some water, in dosages indicated by your doctor.

The initial dose recommended by most doctors is 0.5 mg of Generic Chantix once a day for three days. The dosage can then be increased to 0.5 mg twice per day for four days and then 1 mg once per day for the rest of the therapy period. The treatment usually lasts for 12 weeks. If the treatment turns out to be successful, another 12-week period is recommended in order to avoid a relapse. However, if the initial 12-week period does not lead to successful smoking cessation, trying again will not be recommended.

In case you think you have taken more Champix than recommended, please seek immediate medical assistance. Signs of an overdose may include severe nausea and vomiting, severe dizziness and headache.

If you happen to accidentally miss a dose, take one as soon as you can, but not if the time for the next dose is too near. Do not double the dose.

Champix should be taken with caution with people suffering from kidney or liver disease and cardiovascular disease. It should be avoided during pregnancy and breastfeeding period. Psychiatric patients should be monitored by their doctor during treatment with this drug. Generic Chantix is not recommended for persons under the age of 18. This drug may interact with other medications, especially with other nicotine replacement drugs and smoking cessation aids, such as nicotine gum or patch.

Champix, with varenicline as its active ingredient, is considered by many to be more effective than other equally prescribed smoking cessation aids, such as bupropion. However, like other smoking cessation aids, there is no guarantee it will actually lead to quitting smoking for good. If the drug shows no results after the initial treatment period, doctors usually recommend trying other methods.

Champix should not be used during pregnancy and breastfeeding period. Persons who are allergic to varenicline or any inactive component of the drug, as well as minors, should not use this drug.

Treatment with Champix usually lasts for 12 weeks. If there are no results after that period, it is not advised to try again. Do not start or stop using this drug without consulting your doctor.