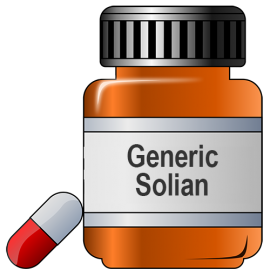 Amisulpride or otherwise called as Solian (generic name) is an atypical antipsychotic drug. It works by blocking the dopamine receptors in the brain and hence it reduces the over activity of the dopamine, which is a serious problem in the mental disorder named Schizophrenia. The more correct usage associated with the Amisulpride is the easing of the symptoms of schizophrenia. Schizophrenic patients usually experience positive symptoms (hallucinations, thought disturbance and so on) and negative symptoms (Social isolation, lack of emotion and so on) due to the over activity of dopamine.

Likewise, other medications, Amisulpride too entitled to have serious side effects. The most common side effects are increased salivation, anxiety, restlessness, and extra pyramidal effects as if tremor, rigidity and twitching. The other common side effects are sleepiness, insomnia, dry mouth, hyperprolactinaemia, erectile dysfunction, hypotension, weight gain, the gastrointestinal symptoms are constipation, nausea or vomiting and others.

This drug is prescribed is usually once or twice a day. The dosage of the Amisulpride depends on the disease. However, the usual dosage is between 50mg and 800 mg a day. But, the doctor can increase the daily dose up to 1200mg per day, which depends on the situation. However, 300mg can be taken as a single dose, but the dose above 300mg should be taken as a divided dose in the morning and in the evening. This medicine should be taken through the mouth and better before a meal. The tablet should not be chewed, but should be taken with water.

If you missed your tablet, try to take it as soon as you remember it, however, if the next dose is nearby, try to skip this missed dose. Do not take both the tablets at the same time. In case, if you take more than one tablet at a time, immediately contact the doctor and do accordingly what he/she says. In addition, do not take the action of discontinuing the drug without talking with your doctor.

Amisulpride should be stored in a place where the children cannot reach. This drug does not require any special storage condition. However, the drug should not be used after it has been expired, which means after the last day of the month which has been stated. Moreover, the tablet should not be used, if there is any discoloration and so on.

This drug should be discontinued and notify the doctor, if then

If you are having any of these listed problems or doubt, please talk with your doctor, before taking the medication. In addition, do not DRIVE after taking the tablet. In addition, the special care should be taken if the person is also suffering from other diseases.