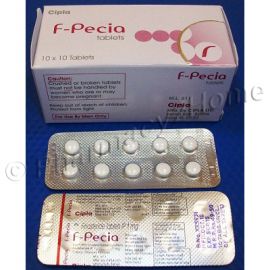 F-Pecia has been discontinued.
Alternativly you can use Finpecia has the same active ingredient 1mg Finasteride.
If you are looking for buying Finasteride without quinoline yellow you can use Proscalpin
What is Generic Propecia 1mg - F-pecia

F-pecia is a pharmaceutical medication that is used to help men with hair loss slow down this process and stop it eventually. It acts by reducing the levels of dihydrotestosterone which has been identified as the cause for male pattern baldness and by doing so; F-pecia heals the follicles and stops their deterioration and subsequent disappearance from the scalp.

F-pecia falls in the class of drugs known as type II 5-alpha reductase inhibitors. What this means is that F-pecia inhibits the function of an enzyme known as 5-alpha reductase which is necessary for the conversion of testosterone into DHT in the scalp of males. DHT is more aggressive and causes the hair loss through deteriorating the hair follicles. With the introduction of F-pecia, DHT drops in levels and hair loss is slowed down and stopped.

Looking after your medicine

F-pecia should be kept in a dark, cool and dry place out of children's reach.

F-pecia needs to be taken exactly as was prescribed and taken only in such doses that were recommended to the patient by their physician. It is very important to take F-pecia regularly and to continue to use it for at least 6 months even if you do not experience any benefits.

F-pecia is taken daily, one 1 mg pill every day with a full glass of water.

F-pecia overdose will not result in life-threatening effects or symptoms but it can still be dangerous and should be avoided at all costs.

In case you have missed a dose of F-pecia, you should take it as soon as you remember and then continue with your scheduled regimen. If the next scheduled dose is very close, you should only take that one.

There is data that suggests that F-pecia may increase the chances of developing prostatic cancer which is why you should regularly check your prostate health. Also, F-pecia must never be handled by small children and pregnant women as it may be absorbed through the skin and cause developmental problems.

F-pecia can only cause milder side effects which may include swelling and tenderness of breasts, swelling of feet or hands, abnormal ejaculation, sex drive changes, dizziness, headaches, weakness, runny nose and skin rash.

F-pecia is the finest medication for hair loss and one that has helped millions of men keep their hair. It can slow down the hair loss process and stop it after prolonged use. Majority of the users, especially those that continue to use F-pecia for longer periods of time also report that they have noticed new hair growth.

F-pecia should not be used in case you are allergic to the active ingredient, finasteride or a similar drug called dutasteride. There are other cases in which the doctor needs to be careful about prescribing F-pecia and in which the treatment may be modified. These include: prostate cancer, liver insufficiency or disease, bladder muscle disorder, urethral stricture, inability to urinate.

F-pecia should be taken for at least 12 months before deciding that it does not work. For some men it may take longer to work but in most cases, F-pecia works after 3 months of use, with more pronounced effects happening later.