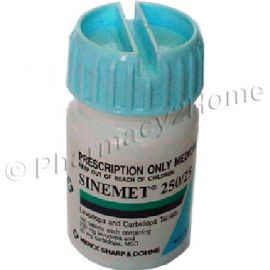 The active ingredients of Generic Sinemet are two drugs - carbidopa and levodopa. Parkinson's disease is believed to be associated with low dopamine levels. Levodopa, when taken, crosses the brain-blood barrier and gets converted into dopamine, and this increased dopamine concentration helps with nerve conduction and movement disorders associated with Parkinson's disease. Carbidopa, which does not pass the brain-blood barrier_ is there to prevent the breakdown of levodopa before it gets into the brain, thus allowing the lowest effective doses of levodopa to be used. This is useful since it reduces the side effects from levodopa.

Generic Sinemet should be kept at room temperature, away from direct sources of heat, moisture and sunlight and away from the reach of children.

Generic Sinemet is taken by mouth, with some water. It can be taken with meals to reduce the chance of nausea and vomiting, however make sure the food you combine it with is not particularly high in protein.

Never take more than the prescribed dosage of this drug. If you suspect an overdose, seek immediate medical attention at the nearest ER or poison control center.

If you happen to miss a dose of Generic Sinemet, take the drug when you can, but not if the time for the next daily dose is near. Do not double the dose.

Generic Sinemet may interact adversely with a number of medications, so make sure to inform your doctor of any other pharmacological treatment you may be undergoing. These drugs include amantadine, benztropine, procyclidine, trihexyphenidyl, haloperidol, droperidol, loxapine, phenothiazines, thioxanthenes, methyldopa and reserpine. Combining this drug with MAO inhibitors may lead to high blood pressure. On the other hand, postural hypotension may occur when combining Generic Sinemet with drugs that lower the blood pressure. This drug is generally not recommended for pregnant and breastfeeding women.

Generic Sinemet may cause occasional involuntary movements such as gnawing, chewing, twisting mouth and tongue movements, head bobbing, involuntary feet and hands movements, as well as twitching, dizziness, hand tremor and muscle jerks during sleep. This drug may cause psychiatric disturbances such as anxiety, poor memory and concentration, nervousness, agitation, nightmares, insomnia, depression or euphoria. Nausea, vomiting and loss of appetite are also common.

Generic Sinemet is a particularly good choice in treatment of Parkinson's disease since its unique combination of two drugs, levodopa and carbidopa, is designed to achieve the best possible results with the fewest of the adverse side effects, such as poor tolerance, nausea and vomiting.

Generic Sinemet should not be used in case of allergies to any of the drug's ingredients, active or inactive. This drug is generally not recommended to pregnant or nursing women.

Take Generic Sinemet for as long as indicated by your doctor. Do not stop using the drug without consulting your doctor first. Sudden discontinuation of this drug may lead to dangerous effects.