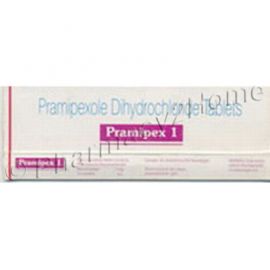 The active ingredient of Generic Mirapex is pramipexole, which is a dopamine agonist. It acts as an agonist for certain dopamine receptors in the striatum, which in case of Parkinson's disease no longer receives adequate dopamine signals, resulting in poor body movement regulation and impaired motor function. Pramipexole balances the dopamine signals and normalizes the impaired functions.

Generic Mirapex should be kept at room temperature, in a dark and dry place, away from the reach of children.

Generic Mirapex is taken orally, with some water, regardless of meals. However, in case of nausea or stomach upset, it is recommended to take it with some food. To get most benefits from this drug, take it at the same time each day.

Generic Mirapex dosage depends on your condition and it should be set by your doctor. In most cases doctors recommend starting with the lowest effective dose, such as 0.375 mg per day, which can then be increased gradually over several weeks. The range of effective dosages is 1.5 mg to 4.5 mg per day. Higher dosages have not proven to be significantly more beneficial.

Never take more of this drug than what your doctor has prescribed. In case of an overdose, seek immediate medical attention at the nearest ER or poison control center.

If you accidentally miss a dose, take the drug when you can, but not if the next scheduled dose is near. Doubling the dose to make up for the missed one can be dangerous.

Generic Mirapex should be used with caution in people suffering from kidney or liver problems, heart problems, low blood pressure, mental disorders and sleep disorders. This drug may make you dizzy, in which case you should avoid driving or operating heavy machinery. Generic Mirapex should not be used while breastfeeding. This drug may interact with other drugs, such as antipsychotics, cimetidine, metoclopramide, antihistamines, anxiety medication, sleeping pills, muscle relaxants and narcotic pain relievers.

Generic Mirapex is a very effective symptom reliever for Parkinson's disease, especially for patients in the early stages of the disease. It helps with stiffness, tremor, unsteadiness and slow movement, and it also decreases the number of episodes of the ����on-off syndrome,_��������� where the patient is temporarily unable to move. In addition, this drug improves sleep in patients suffering from restless legs syndrome.

Generic Mirapex is not suitable for people allergic to pramipexole or any of the drug's inactive ingredients. It should be used in pregnancy only when absolutely necessary, and avoided during the breastfeeding period.

Take Generic Mirapex for as long as indicated by your doctor. Do not stop or start using it on your own.