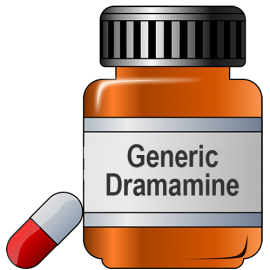 Generic Dramamine is an oral drug which is used for preventing dizziness and nausea followed with vomiting associated with motion sickness. It is often used prior to going on journeys, either by vehicles or some other modes of transportation. Dramamine is also often used as a drug of abuse.

When you buy Generic Dramamine online, you should store it in a dry place, away from heat and direct light.

You should use Generic Dramamine exactly as it is outlined on the instruction label. It can be taken with or without food. You should take your Dramamine at least half an hour before the journey or the planned activity.

Generic dimenhydrinate is taken when needed, usually in doses between 50 mg and 100 mg. children between 2 and 12 years should take no more than 12.5 to 50 mg of the drug.

If an overdose on Generic Dramamine is suspected, seek emergency medical help.

Mild side effects of Generic Dramamine may include: drowsiness, thickening of mucus in throat or nose, dry mouth, nose or throat. More serious side effects may include: chest pain, decreased alertness, convulsions, difficulties urinating, fast or irregular heartbeat, pronounced excitability, chills, fever, hallucinations, mood or mental changes, tremor, seizures, pounding in the chest, jaundice, wheezing. If you experience any of these, contact your doctor at once. This is not a complete list of possible side effects.

Do not take Generic Dramamine for longer periods of time than those recommended by the doctor.