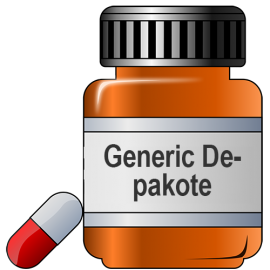 Depakote ER (Divalproex sodium) consists of two compounds, namely sodium valproate and valproic acid in a 1:1 potions. This white powder is then made into tablets of three different dosages, such as 125mg, 250mg and 500mg. These tablets are taken orally and are distributed only with a prescription.

Depakote ER is also named as Valproate semisodium or divalproex sodium and has a 10-18.5% protein binding capacity. It metabolizes in the liver and excreted by kidneys with a half life of 9-16 hours. It acts by increasing the levels of gamma-aminobutyric acid concentration in the brain.

Depakote ER is mainly used to treat mania, bipolar disorder, epilepsy and for the prevention of migraine. The dosage differs according to the disease the patient may have; In case of mania the initial dose is 750 mg daily in several divided doses, but for migraine it is given as 250mg tablets two times a day. Anyhow the maximum dose will be up to 1000 mg per day. Normally this drug should be taken continuously for at least 14 days to see its full effect.

This tablet comes with an extra patient information sheet and do not forget to read it before you start taking your pills. You may take the pills with or without food, but it is always safe to take it after a meal to prevent any kind of gastric irritation. Take the tablet as a whole, do not crush, break, or chew as it comes with a gastric protecting coat. In case you want to stop this tablet do not do it abruptly, especially if you were taking due to epilepsy. This might precipitate epilepsy attacks. Therefore, talk to your doctor and he will reduce the dose gradually until discontinuation. This tablet is not a pill which you should take only when you feel ill, take it continuously even though you feel alright and in case of a missed dose, do not add it up to the next time. But, remember to take the next doses on time.

Overdoses may cause serious problems. In case of suspect of overdose, rush the patient into the nearest emergency care department.

Store this drug in cool, dry place, away from children and do not let it expose to heat directly or indirectly.

Liver diseases, history of drug related liver failure in the patient or his family members, allergy to this drug and porphyria are the contraindications for this drug.

Also Depakote ER interacts with many other drugs such as Antidepressants, Benzodiazepines, Antipsychotics, Phenobarbitals, Phenytoin, Carbamazepine, Lamotrigine, Felbamate, Zidovudine, Temozolomide, Vitamin K, Chloroquine, Cimetidine, Rifampicin and Carbapenems. Therefore, it is important that you tell the doctor the whole list of drugs you have been using and are using at the moment. Also, it is very important to give a clear, detailed medical history of yourself to the doctor before he prescribe this medication.