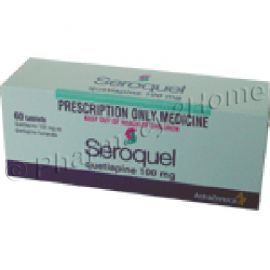 Generic Seroquel is a short-acting atypical antipsychotic used in treatment of schizophrenia and bipolar disorder, and also, alongside an antidepressant, of major depressive disorder. It reduces the hallucinations, improves concentration, allows clearer, positive thinking, helps with nervousness and reduces the frequency and the severity of mood swings.

The active ingredient of Generic Seroquel is quetiapine, an oral atypical antipsychotic drug. The exact mechanism of action of this drug is not clear, but it is believed it works by preventing the communication between certain nerve cells in the brain. It blocks the receptors for several neurotransmitters, more precisely the receptors for dopamine type 2 and serotonin type 2.

Generic Seroquel should be kept away from the reach of children, in a dark, dry place, at room temperature, and used before its expiration date.

Generic Seroquel is an oral medication, taken by mouth, with some water, regardless of meals. Do not split, crush or chew the pills and try to swallow them whole instead.

The initial dosage in treatment of schizophrenia is 25 mg twice a day, which can be increased to 25-50 mg two or three times per day. The target dose is 300-400 mg a day in two or three doses, with 750 mg being the largest dose the patients respond to. As for the bipolar disorder, the initial dosage is 50 mg twice per day, which can gradually be increased to 400 mg per day, divided into two or three doses. Major depression is treated with 150-300 mg per day.

Overdose with Generic Seroquel usually leads to severe fatigue and dizziness, low blood pressure and tachycardia, but in some cases it may lead to cardiac arrhythmia, coma and death. If you suspect an overdose, please contact your nearest ER or poison control center.

If you happen to miss a dose of Generic Seroquel, take the drug as soon as you can, but not if the time for the next dose is near. Do not double the dose.

Before you begin treatment with Generic Seroquel, inform your doctor of your medical history, especially in case of cataracts, liver problems, low white blood cell counts, thyroid problems, obesity, hypertension, high cholesterol and/or triglycerides, difficulty swallowing and seizures. To avoid the risk of QT prolongation, inform your doctor if you or someone in your family has a medical history of heart rhythm problems or other heart problems, if you have low potassium or magnesium levels or if you are taking water pills. This drug may increase your cholesterol levels and cause a weight gain. Generic Seroquel may interact adversely with amiodarone, procainamide, quinidine, sotalol, thioridazine, with azole antifungals, macrolide antibiotics, rifamycins and drugs used for seizures. Avoid alcohol consumption and drugs that promote drowsiness, such as antihistamines, sleeping pills, muscle relaxants, anxiety medications and narcotic analgesics.

Generic Seroquel is a very effective medication in treatment of mental disorders like schizophrenia, bipolar disorder and major depression. Like other antipsychotics, its use should be supervised by a medical professional. It has been approved by the FDA in 1997 and today in addition to the brand there are also several generic versions, which are equally effective and usually cheaper.

Generic Seroquel should be used with caution in elderly people with dementia. Pregnant women should use this drug only when clearly needed. This drug is not recommended to people allergic to quetiapine or any of the drug's inactive ingredients.

Treatment with Generic Seroquel usually requires the use of this drug over an extended period of time. It is very important not to stop using it without consulting your doctor, even if your condition starts to improve.