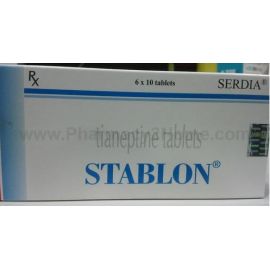 Stablon is an oral drug for symptoms of mild to major depressive disorders in adults. It also reduces anxiousness without the need for an anti-anxiety agent. Tianeptine is the active ingredient of Stablon. Tianeptine increases the expression of the brain-derived neurotrophic factor (BDNF) which increases neural plasticity, i.e., it increases the ability of the brain to adapt in response to environmental changes and lesions. Tianeptine also increases the uptake of serotonin by the brain tissue, thus acting as an anti-depressant. [1] Depression is about three to 10 times more common in epileptic patients than in healthy individuals. Tianeptine can be used safely to treat depression in patients with epilepsy. Hence, tianeptine is a drug of choice in such patients. [2]

Tianeptine is used to treat mild to major forms of depression. Structurally, it is classified as a tricyclic antidepressant (TCA), but the pharmacological properties of tianeptine vary from TCA. The mechanism of action of tianeptine is different from selective serotonin reuptake inhibitors which are another class of drugs for the treatment of depression. The anti-depressant effects of tianeptine are owed to its action on serotonin receptors, glutamate receptors, and other receptors. Tianeptine acts on glutamate receptors, causing the release of BDNF. It modulates the glutaminergic activity in the amygdala, which is the emotional region of the brain, leading to a reduction in depression. The response of certain parts of the brain to stress is reduced by tianeptine and, thus, stress-related behavioral issues are prevented. [1]

Looking After Your Drug

Store in a clean, dry place. Protect from moisture, direct sunlight, and heat. Do not freeze. Keep away from children. Store it at a temperature below 30°C. [3]

Stablon should be taken on an empty stomach before the main meals. An adult dose is 12.5 mg thrice a day. The dose for the elderly and patients with renal impairment should be reduced to a total daily dose of 25 mg. Take the Stablon tablet as directed by the physician. Do not take more doses of tianeptine without asking your doctor. [3]

How to Take the Medication?

Stablon should be only consumed if prescribed by a registered medical practitioner. Stablon is available as an oral tablet that should be taken with water before meals, on an empty stomach. It is not advised in children under 15 years of age. [3]

Seek medical help in case of an overdose. Treatment for overdose is gastric lavage followed by symptomatic treatment. Monitoring of cardiovascular, respiratory, metabolic, and renal functions is necessary. [3]

An individual should not use Stablon if he/she is allergic to tianeptine. Avoid drinking alcohol with Stablon as the absorption of tianeptine is decreased in the presence of alcohol. Do not use tianeptine if you have to perform tasks requiring mental alertness like driving. Tianeptine is to be avoided in individuals undergoing a surgery that will require general anesthesia. [3] Tianeptine causes hepatotoxicity and, thus, is not suitable for individuals with liver diseases. [4] The dose of tianeptine should be decreased gradually over a period of seven to fourteen days before withdrawal. Abrupt withdrawal may cause withdrawal symptoms. [3]

Children below 15 years of age should not consume tianeptine. It should also be avoided in pregnant women and lactating mothers. Don’t use any other drug with Stablon without consulting your doctor. [3]

Stablon is an oral therapy for the treatment of depression in adults, which should be taken only after consulting a physician. It may cause some side effects such as nausea, constipation, fatigue, loss of appetite, abdominal pain, insomnia, drowsiness, palpitations, muscle or joint pains, vertigo, tremor, headache, and dry mouth and, rarely, side effects such as hepatitis. Individuals should inform their doctor if they experience any of the above side effects. [3]

When Should the Drug Not Be Used?

Before the beginning of the treatment, the medical history of the patient should be studied. Special precautions should be taken in individuals with liver and kidney diseases. [3,4] The doctor must be informed of a pregnancy or any plans for pregnancy. [3]