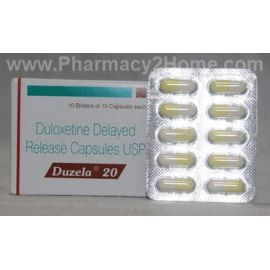 Duloxetine is a selective serotonin and norepinephrine reuptake inhibitor (SNRI) that is used mostly in treatment of major depression disorder and generalized anxiety disorder. It is also effective in treatment of osteoarthritis and muscle and bone pain. It relieves pain in peripheral neuropathy (especially in diabetic neuropathy) and can be used to control the symptoms of fibromyalgia.

Generic Duloxetine should be kept in a cool, dry and dark place, away from the reach of children, and used before its expiration date.

Generic Duloxetine is taken by mouth, with some water, with our without food. If it causes nausea or upset stomach, it may help to take it with meals. Capsules should be swallowed whole, not chewed or opened.

The recommended dosage of Generic Duloxetine in treatment of depression is 20 mg or 30 mg twice a day or 60 mg once a day. For other issues, such as anxiety disorder, fibromyalgia and diabetic neuropathy, the usual dosage is 60 mg per day. In some cases doctors recommend starting with 30 mg and then increasing the dosage to 60 mg per day, which helps the patient adapt to the drug.

Never take more than the recommended daily dosage of Generic Duloxetine. Symptoms of an overdose, which can be very dangerous, include headache, vomiting, fainting and coma.

In case you miss a dose of Generic Duloxetine, take the drug when you can but not if the time for the next dose is near.

Generic Duloxetine is a very efficient way to treat major depression disorder, as well as anxiety disorder and pain associated with conditions like fibromyalgia and diabetic neuropathy. In Europe, this drug is also used in treatment of urinary incontinence. As with any other antidepressant, it is not recommended to use this drug without consulting a doctor.

Generic Duloxetine should not be used in case of allergic reactions to any of the drug's components. This drug is not considered safe from pregnant women and for children.

Do not stop taking Generic Duloxetine on your own. Stopping using this drug without your doctor's explicit instructions can actually cause worsening of the condition and may exacerbate the side effects.