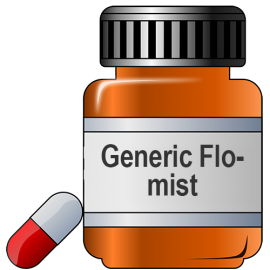 Generic Flomist is a nasal spray used to relieve symptoms of allergic rhinitis, such as itching, sneezing, congestion, postnasal drip and runny nose, as well as non-allergic rhinitis. It is a corticosteroid delivered in form of spray that directly reduces inflammation and swelling of the nasal passages.

The active ingredient of Generic Flomist is fluticasone propionate, a synthetic triflourinated glucocorticoid. As such, it binds to the glucocorticoid receptors and initiated as number of inhibitory actions and also reduces the synthesis of several inflammation mediators. By reducing the inflammation, fluticasone propionate relieves the symptoms of both allergic and non-allergic rhinitis.

Generic Flomist is a nasal spray that comes in a 50 mcg capped bottle that should be shaken before each use. The tip of the bottle is inserted into each nostril and when the bottle is pressed, its mechanism releases the spray into the nasal cavity. It is recommended to clean the tip of the container after each use and to avoid sharing the spray with other people. Avoid contact of the spray with eyes and mouth.

The recommended initial dosage for adults is two sprays in each nostril once a day. Each spray delivers 50 mcg of fluticasone propionate. The dosage can also be reduced to one spray in each nostril, delivering the total of 100 mcg per day. The maximum allowed dosage is 200 mcg per day.

If you think you have taken more than the recommended dosage of the drug, contact your local poison control center and seek immediate medical help.

In case you miss a dose, take one when you can, but not if the next scheduled dose is too near. Never double the dose to make up for the one you missed.

Generic Flomist should not be used in case of nasal ulcers, trauma or surgery. Inform your doctor if you are suffering from any medical condition (especially tuberculosis, glaucoma, low adrenal gland function) or if you are taking any other medication (especially other corticosteroids, natalizumab, ritonavir or ketoconazole)

Generic Flomist may cause irritation of mucous membranes of the nose, wheezing, coughing, nausea and vomiting. These side effects should disappear as soon as you stop using the drug. More serious but less likely side effects may include severe sore throat, fever, nasal pain, difficulty swallowing and white patches on the back of the mouth. In rare cases, Generic Flomist may cause an allergic reaction with symptoms such as rash, swelling, difficulty breathing, irregular heartbeat, confusion, dizziness, fainting and seizures.

Generic Flomist is a good choice for people suffering from seasonal allergies (hay fever) that involve symptoms such as sneezing, runny or stuffy nose, postnasal drip and itching. It is useful for people who for some reason cannot take oral allergy drugs. Generic version of fluticasone propionate is equally effective as the brand versions, and usually quite cheaper.

Generic Flomist should not be used before or after surgery of the nose or in case there are ulcers, lesions or injuries to the nose. It is not recommended for people who are allergic to fluticasone propionate or any of the inactive ingredients of the drug.

Take Generic Flomist only as long as clearly needed and as indicated by your doctor. In case of prolonged use, make sure to have regular check-ups by your doctor.