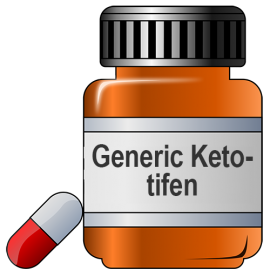 Generic Zaditen is an oral antihistamine drug which is used to prevent asthma attacks and to reduce the number of asthma attacks in patients. It is commonly used in children. It is not used when an asthma attack is already happening. It is a prophylactic measure.

Generic Zaditen is an antihistamine drug and also a mast cell stabilizer. It can be found in form of ophthalmic solution under the names Zaditen and Alaway and it is also available for oral administration. As a tablet, Generic Ketotifen is used to reduce the number of asthma attacks in patients. It is commonly used in small children who are suffering from asthma. It needs to be pointed out that it will not help mitigate an ongoing asthma attack.

Keep  in a cool, dark and dry place.

It should be taken regularly, exactly as the doctor has prescribed. It is very important not to miss the dosages and to be as regular as possible so as to ensure the best prophylactic effects of the drug. It may require some time to fully see the beneficial effects of the drug. You will most likely still use your asthma medications although your doctor may slowly discontinue them after a few months of using Zaditen .

Take exactly the amount of Generic Zaditen that the doctor has prescribed to you and according to the prescribed scheduled.

Symptoms of an overdose on Zaditen may include drowsiness, hyperexcitability, confusion, rapid heart rate, fainting, dizziness, seizures. Seek emergency medical assistance if an overdose on Generic Ketotifen is suspected.

Take the missed dose as soon as you remember. Skip it if it is almost time for the next scheduled dose. Do not double the dosage to make up for the missed one.

It may cause drowsiness and dizziness. If you experience these, do not do anything potentially dangerous until the side effects have subsided. You should continue using the drugs that you have already been using unless your doctor tells you to do differently. If you become pregnant, inform your doctor at once. They will decide whether you should continue using it. It is not a treatment for an asthma attack that is happening.

Mild side effects of Zaditen may include dizziness, drowsiness, insomnia, flu like symptoms. More serious side effects that need to be reported straight away include stomach pain, rash, unusual weight gain, unusual bleeding and bruising, irritability, unusual nervousness and excitability.

Generic Zaditen should not be used if you are allergic to Ketotifen. Pregnant women should only use Generic Ketotifen if their doctor has instructed them to do so specifically.

You have to take Generic Ketotifen for as long as your doctor instructs you to, even if you feel alright and have not had an asthma attack in a long time.