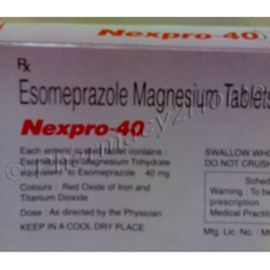 Generic Nexium is a medication from the group of proton pump inhibitors, which reduce the secretion of gastric acid. That way it relieves the symptoms of dyspepsia, peptic ulcer disease, gastroesophageal reflux disease (GERD) and Zollinger-Ellison syndrome.

The active ingredient of Generic Nexium is esomeprazole, a drug that belongs to the class of proton pump inhibitors (PPI), like omeprazole, lansoprazole and pantoprazole. Like those other PPIs, esomeprazole relieves the symptoms of gastric ulcers, GERD and Zollinger-Ellison syndrome by inhibiting an enzyme in the stomach wall that produces stomach acid. Less stomach acid allows the healing of the stomach and of the esophagus.

Generic Nexium should be kept in a dry, dark place at room temperature, away from the reach of children. Do not use this drug after its expiration date and dispose of it according to the instructions on the leaflet or the package.

Generic Nexium is an oral medication. It should be taken with some water, approximately one hour before meals. The pills should be swallowed whole, not chewed or crushed. They can be opened in case the patient has difficulties with swallowing, and mixed with some apple sauce.

The usual dosage in treatment of GERD is 20 mg or 40 mg of Generic Nexus over the course of four to eight weeks. The dosage for prevention of ulcers caused by prolonged use of NSAIDs is 20 mg to 40 mg every day for six months.

Do not take more than the recommended dosage of this drug. In case of overdose, notify the nearest ER or poison control center.

If you miss a dose, take one when you can or when you remember, but not if the next scheduled dose is near. Do not double the dose.

Before taking this drug, notify your doctor of your family history, especially of liver disease and other stomach problems, such as tumors. This drug is likely to pass into breast milk, which is why its use is not recommended during the breastfeeding period. Generic Nexium may interact with other medications, especially with atazanavir and nelfinavir, but also with warfarin, cilostazol and HIV drugs. Some medications depend on the stomach acid, and their action may be decreased during treatment with Generic Nexium. Those include ampicillin, iron and calcium supplement, dasatinib and ketoconazole.

Common side effects of Generic Nexium include headache, diarrhea, constipation, gas, nausea, vomiting and dry mouth. More serious side effects include signs of a lung infection, persistent vomiting, severe abdominal pain, fatigue, dark urine and yellowing of the skin and eyes. Prolonged use (more than three years) may cause vitamin B12 deficiency.

Generic Nexium is a very good solution in treatment of GERD, gastric ulcers and other conditions associated with excessive production of gastric acid. It relieves the symptoms of acid reflux and also protects the walls of the stomach and the esophagus, thus preventing further complications. The generic version of the drug is equally efficient and usually cheaper.

Generic Nexium is not suitable for persons allergic to esomeprazole and similar drugs. Its use during the breastfeeding period is not recommended and as for pregnancy it should be used only when clearly needed.

In many cases treatment requires a prolonged use of Generic Nexium. Do not stop using this drug on your own, even if you feel your symptoms have improved.